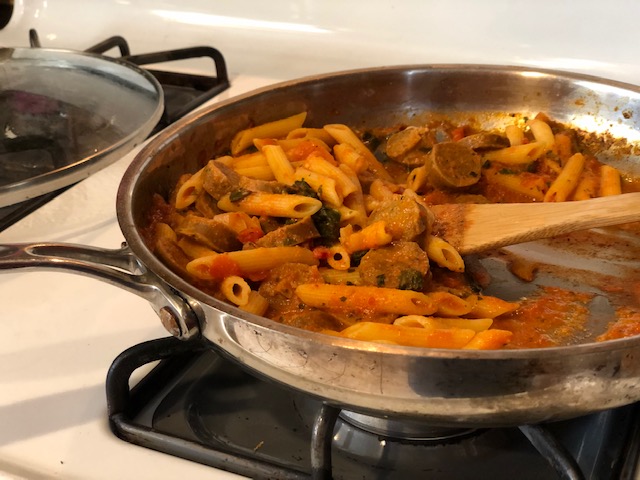 Pasta Ala Vegan Sausages?  In this episode of #LunchBreakLIVE guest chef Paige Parsons Roache, Media Content Producer and Guest Booker for JaneUnChained News Network, creates a divine dish, 100% plant-based, only with what she has available in her kitchen.  So in a pinch, what can YOU cook up with what you already have in your home?

Celebrating being vegan for 4.5 years now, Paige has been committed to bringing ECO-VEGANISM to the forefront of every interaction: Environmentally conscious vegan living. After watching the documentary COWSPIRACY, she went vegan on the spot. Her daughter Katelyn, 13 at the time, chose veganism for the animals 6 months earlier. Paige, on the other hand, after being shocked by the amount of water it takes to put a hamburger on a plate and the fact that animal agriculture is the leading cause of deforestation and climate change, chose to go vegan “for the environment.” Soon after, she attended her first pig vigil with the Los Angeles Animal Save, one of the 700 animal vigils organized by the global group The Save Movement. Once she looked at those baby pigs in the eyes, she knew why her daughter had gone vegan.  Cooking as a guest chef on #LunchBreakLIVE after meeting Jane Velez-Mitchell at VegFestLA, and inspired by Jane’s bold courage, Paige became a Contributor for JaneUnChained News. Paige reports on all the latest animal rights’ aspects, including The Save Movement’s pig/chicken/cow vigils, various PETA protests, VegFests, book launches, Anonymous for the Voiceless’ Cube of Truths and vegan conferences. She is a Media Content creator, as well as the Booker for #LunchBreakLIVE, #JaneUnChained’s daily vegan cooking show and speaks globally on behalf of JaneUnChained News Network.

Paige is not only a fabulous Animal Advocate and Eco-Vegan Warrior, but she is also a badass in the kitchen, always using creativity to develop awesome plant-based meals for her friends and family.  Let’s check out what she made today!

We hope that you will take this opportunity to try this recipe at home and let us know how you liked it.  You can never go wrong with pasta in my eyes, add some vegan sausage and you’ve got a killer meal! 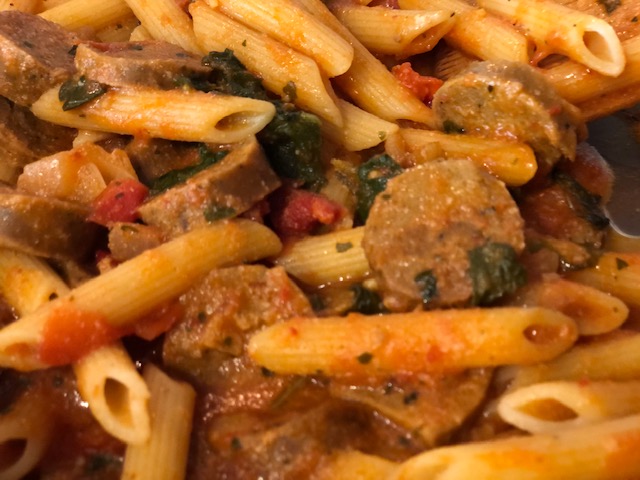