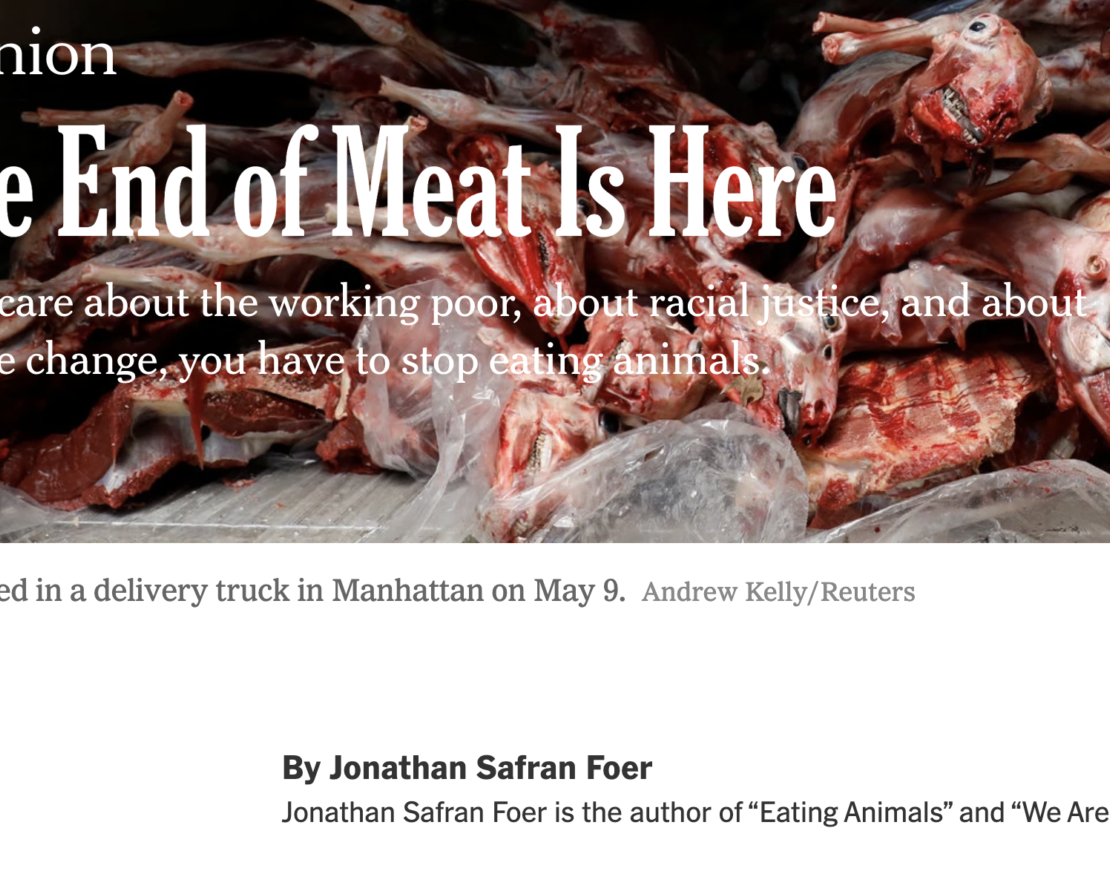 This morning, May 21st, 2020, over some fair trade, shade grown coffee swirling with macadamia nut milk, I clicked open my digital subscription to the most respected news publication in the world. I spotted one particular headline and my eyes blinked. My heartbeat quickened. “The End of Meat Is Here.” This declaration jumped out at me. Is this a dream?  Do I need Lasik again? Should I call a therapist? A squint later, I realized, no… I am not hallucinating. I am not having a breakdown. I can even wait another year on the Lasik. This is real. This is really happening.  My lifelong dream is becoming a reality. People are waking up. And, the New York Times just dropped a ginormous truth bomb on the “best and the brightest!” Finally! Eureka! I did a little dance… until my coffee spilled and my dogs started barking.

The acclaimed author, Jonathan Safran Foer, has written a spot-on opinion piece for the New York Times that lays out why animal agriculture must end… and soon. My fellow vegans and I have been making this very same case for decades, not as eloquently, but still… we’ve been putting it out there. What have we gotten in return? Contempt, condescension, hostility. People have laughed in our faces, told us to shut up, told us we need to get a life, etc. They’ve also suggested that, because we care about animal suffering, we don’t care about human suffering. That is the accusation that hurts the most. With this article, Jonathan Safran Foer has exposed that assumption for the lie that it is. The secondary headline reads like this. “If you care about the working poor, about racial justice, and about climate change, you have to stop eating animals.” Bravo!

He proceeds to lay out the utter contempt the meat industry has for its own workers, most of whom are immigrants. Because they don’t get enough bathroom breaks, many slaughterhouse workers were already wearing adult diapers on the kill line, according to an Oxfam report. As if that’s not demeaning enough, now they are being forced – by the Trump administration, which declared them part of critical infrastructure – to go into COVID-19 infested facilities and kill animals for eight hours a day… knowing they could be signing their own death warrants. Many slaughterhouse workers have already died. Others are ill. Most are terrified, according to the workers’ representatives JaneUnChained has interviewed. You might say… those plants have become slaughterhouses for people too!

The NYT opinion piece also mentions the enormously destructive role animal agriculture plays in climate change, noting that “eating a plant-based diet is ‘the most important contribution every individual can make to reversing global warming.’ ”  If you really want to know how absolutely devastating meat and dairy is to our climate, please read this white paper from ClimateHealers.org.

And, he talks about how factory farms disproportionately impact communities of color.

All these arguments have been made many times before. The difference is… today they were made in the New York Times! This is a reason to celebrate!  Those of us who have directly experienced the infamous News Media Blackout on Animal Rights should be particularly thrilled! Our movement’s message is finally being disseminated by the powers that be! The bright folks who can easily dissect all the nuances of the Mueller report (which I listened to and it was a real slog) have now decided to open their eyes, minds (and hearts?) to the most important simple math equation ever. 7.8 billion humans raising, killing and eating 70+ billion cows, pigs, chickens, turkeys and lambs every year = global self-immolation.

This is a breakthrough moment for the animal rights movement.  So, read the whole article, Many did!

A Protein Bowl That Ignites Gratitude With Every Bite!