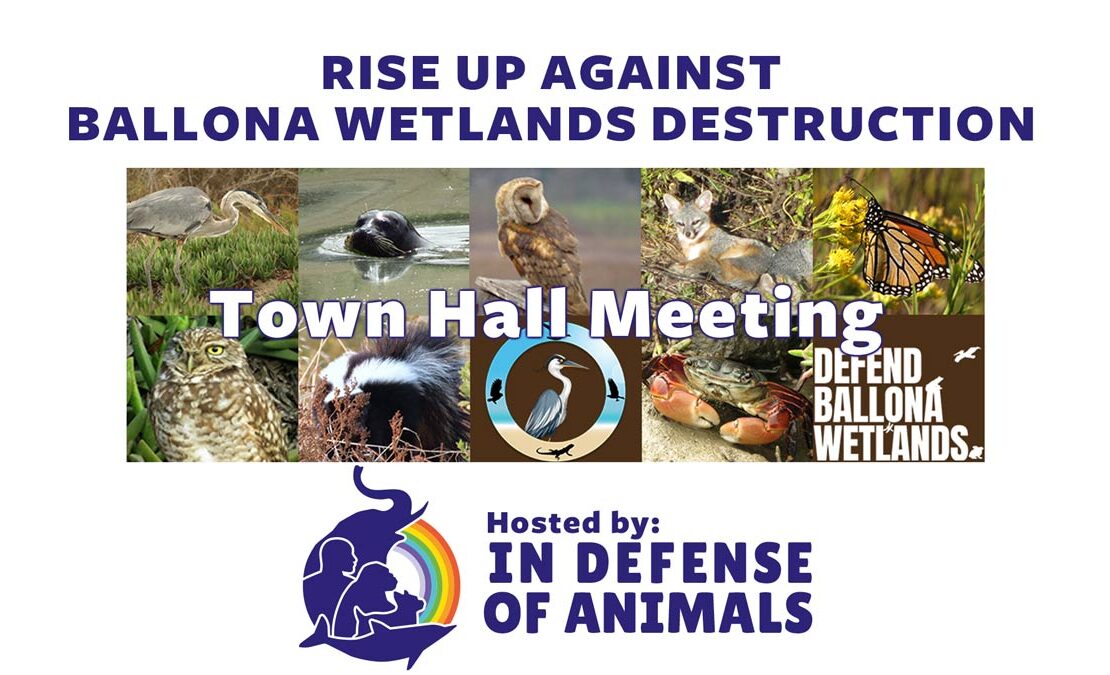 A tidal wave of opposition is rising up against a reckless plan to destroy LA’s last coastal wetlands, 640 acres known as the Ballona Wetlands Ecological Reserve in the Playa del Rey neighborhood! Watch this Town Hall, hosted by In Defense of Animals and moderated by Molly Basler of GREEN DREAM CAMPAIGN. Key speakers include notable environmentalists and political leaders who strongly oppose the bulldozing plan as racist and corrupt: Ethan Senser, Southern California Organizer, Food & Water Watch – California; Tony Hale, Executive Board Member of the California Democratic Party, Chair of the Los Angeles County Democratic Party; Max Goldberg, Corresponding Secretary of the PPDC – Pacific Palisades Democratic Club; Marc Saltzberg, Executive Board Member of the West LA Democratic Club; Dorothy Reik President of the Progressive Democrats of the Santa Monica Mountains, defending Wetlands for years. These wetlands are home to thousands of species, some threatened and endangered. Those animals would all die if the 250 million dollar/9 year long plan moves forward! Find out more at defendballonawetlands.org. Take action here by signing the petition to stop this catastrophe: idausa.org/saveballona

Whereas, while more than 90 percent of California’s coastal wetland ecosystems have been destroyed, the type of habitat found at the Ballona Wetlands Reserve is the rarest of our remaining coastal wetlands, 640+ acres on the Los Angeles coast were acquired by the State of California in 2003/2004 for preservation using $140 million, mostly from Wildlife Conservation bond funds, and the reserve is public land dedicated for protection of ecologically sensitive species; and

Whereas, flora and fauna found at the reserve include endangered and imperiled species such as the California Gnatcatcher, White-tailed Kite, California Least Tern, Belding’s Savannah Sparrow, El Segundo Blue Butterfly and the Lewis’ Primrose; some species are year round residents of Ballona while some bird species migrate from as far away as the Amazon River and Arctic Circle; this ecosystem has abundant flora and fauna, including rare species and a high diversity of pollinators; and

Whereas, the California Department of Fish and Wildlife and other government agencies are considering plans to significantly alter the reserve; by bulldozing massive amounts of earth that would radically change the current habitat and eliminate or displace current flora and fauna; and remove the current levees that would release polluted water into the fragile ecosystem;

Therefore be it resolved, that the Los Angeles County Democratic Party opposes the Department of Fish and Wildlife’s current invasive plans for restoration, and will inform both the Department and the County Supervisors of this resolution; and

Therefore be it further resolved, that the Los Angeles County Democratic Party calls for the preservation of the existing habitat and encourages community-engaged restoration for the protection of existing species and following the precautionary principle: “do no harm” i.e. only using hand tools or

small equipment for habitat enhancement and restoration, and also for the reintroduction of additional native flora and fauna.