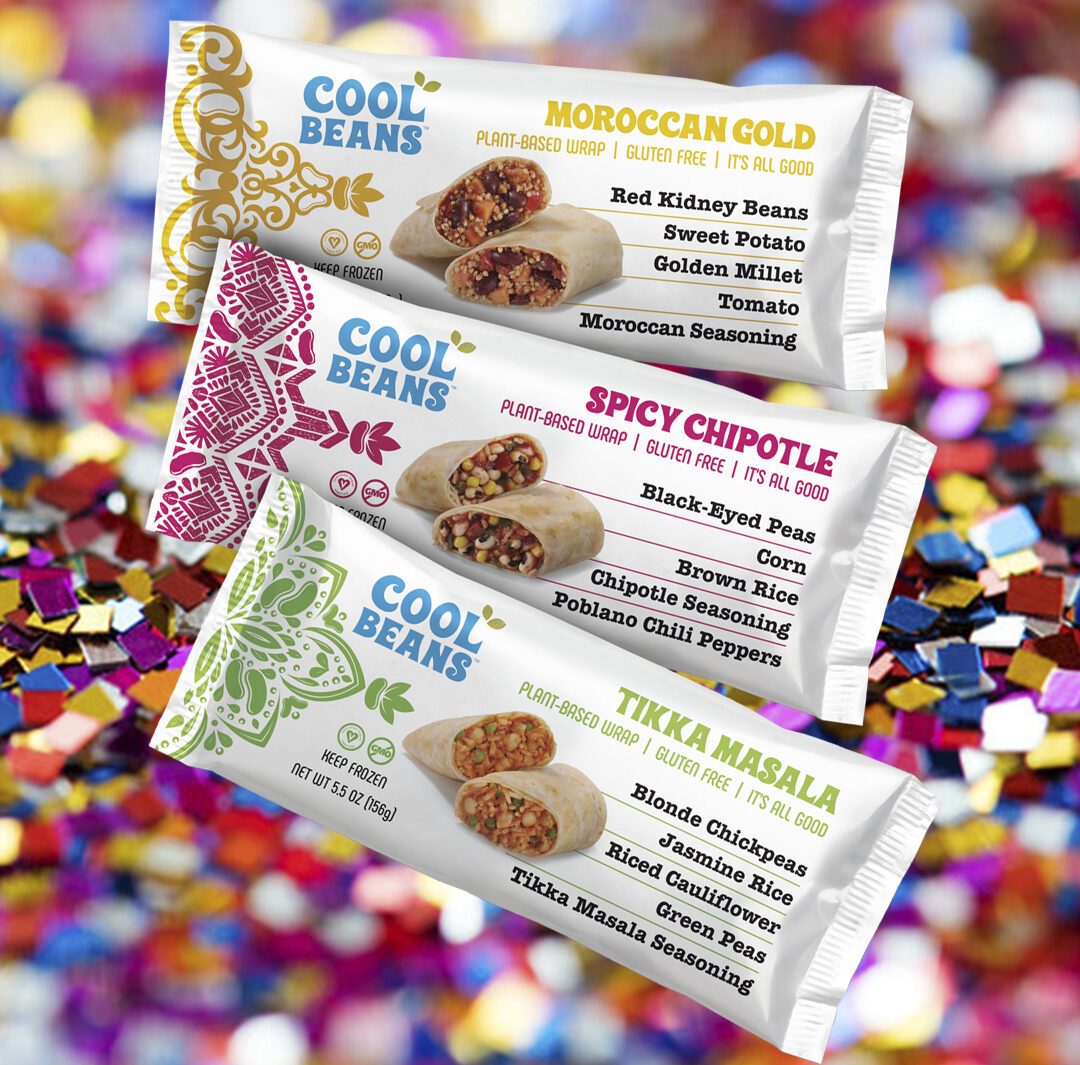 Convenient vegan food? Whhhaaaaat??? That’s right, delicious vegan burritos are hitting the market and another carnist excuse bites the dust. You can’t say plant-based is just too inconvenient anymore… because it ain’t. Now, being healthful, ethical and environmental is as easy as being bad… and the food is much tastier! Exhibit A?  Cool Beans! You can grab this yummy vegan wrap right from the frozen food section of your supermarket. Taste, price and access: three key factors in determining how well a food product fares. That makes obvious sense. This product is here to revolutionize the vegan food space by fulfilling those three mandates. Company executives Tyler Mayoras and Mark Doskow are on a mission to make eating a whole-food, plant-based diet extremely convenient, without sacrificing taste. Cool Beans describes its wraps as “a wholesome, delicious, minimally processed product that focuses on taste and nutrition.“

With the vegan market expanding rapidly, Cool Beans fills a much-needed gap in the frozen-yet-nutritious sector. Check out their first three wraps here!

Vegan food is awesome. But… convenient vegan food… that can just be popped into the microwave… and still provide key nutrients?!  Revolutionary.

“We’re at the center of three huge trends: plant-based, frozen, and gluten-free. We managed to create a product that tastes as good as anything on the market or better.” Mark Doskow

Check out Jane Velez-Mitchell’s interview by watching the Facebook Video just below or you can listen on Voice America Radio.

Sales of vegan food products are skyrocketing. The Good Food Institute found that the plant-based food category has grown five times faster than overall U.S. food sales, which saw an increase of just 2.2 percent in 2019.

“Right now, things couldn’t be healthier for plant-based foods. It’s certainly the fastest growing category, in all aspects of the grocery store. Whether its frozen, fresh, or in the center of the store. What’s really interesting is where it’s going,” says Tyler Mayoras. And he’s right: Generation Z is embracing the vegan movement with open arms. A recent survey found that 35% of Gen Z wish to be vegan  or vegetarian by 2021.

“Generation Z–they are crazy about climate change. The Greta generation is going to lead us out of this thing. I think they’ll be the largest group of vegans in the future for sure.” -Mayoras

URGENCY OF THE PLANT-BASED SHIFT

Doskow and Mayoras recognize the urgency of creating products that make it convenient for society to shift to a plant-based diet. As animal agriculture is a leading cause of world hunger, climate change, deforestation, and wildlife extinction, the impact cannot be understated. “We’re on a race against time to transition to a vegan world,” says Jane Velez-Mitchell.

“We’re seeing the damage all over the planet. What’s it gonna take to wake up that other part of society? I don’t have an answer. I wish I did. But, I know that plant based is the path. The trend is our friend.” Mark Doskow

Plant-Based Cooking Has Never Been Prettier!

As more and more people embrace the plant-based movement, making the products accessible is crucial. Cool Beans is a unique addition to the plant-based market by being frozen, yet free of processed ingredients.

Get your Cool Beans at a Sprouts near you, or order in bulk online!

No Evil Foods Caters A Free Vegan Meal for Activists!