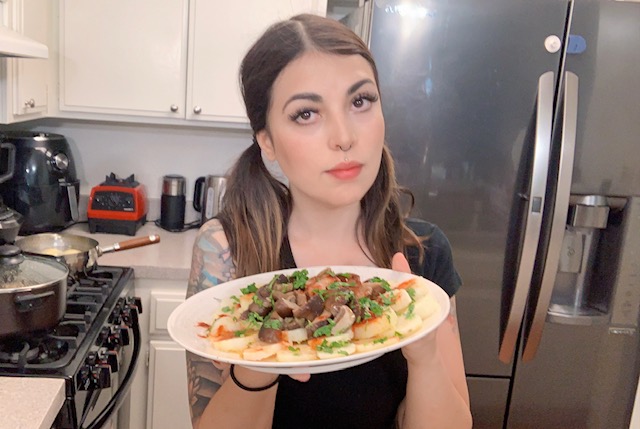 It’s time for some vegan tapas!  Shiitake a la Gallega is what’s for lunch today.  A decadent mushroom dish that mimics a traditional tapas bar recipe, usually made from octopus, but in this recipe, no animals or sea life were harmed! Join us in the #LunchBreakLIVE kitchen with our vegan guest chef from Barcelona, Mina Miusius, creating this unforgettable dish on #JaneUnChainedNews.

NEW YORK IS LUCKY TO HAVE THIS CHEF!

Mina is a vegan chef from Barcelona!  Her passion for cooking and food began when she was a kid, watching her grandma make meals for her whole family. She has always been passionate about food and how it brings people together.

Later in life, she went to a culinary arts school in Barcelona, where she developed her techniques for French, Spanish and Catalonian dishes and other international cuisines (she makes a mean mapo tofu!)

Eventually, she moved to New York City and worked in different vegan kitchens, catered to private events, and worked as a private chef for people with varying diets and lifestyles. She has also consulted and sold some of her vegan recipes to various restaurants.

Her thoughts about Food? It is enjoyable but also nourishing for the body and soul. This is one of the reasons she is a vegan chef ( her main reason, of course, was for the animals!)

SO WHO WANTS SOME INTERESTING VEGAN TAPAS

This vegan tapas dish, shiitake a la gallega, perfectly mimics a popular traditional tapas bar dish usually made from octopus on a bed of potatoes.  Instead of octopus, Mina uses shitake mushrooms, the perfect replacement because of its texture!  This recipe can be served hot or cold, so it is perfect for any time of the year.  You can use the broth to make a paella as well.  it’s a two-for-one kind of recipe! 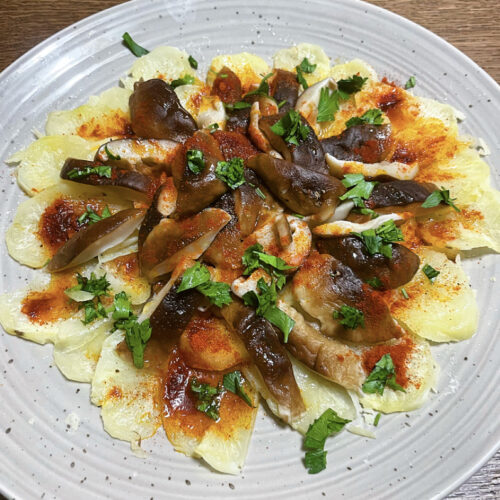 Notes:
With the broth you can make some paella!!
The dish can be served hot or cold
Can be made the day before 🙂
Keyword vegan
Tried this recipe?Let us know how it was!

THANKS FOR JOINING US FOR TAPAS!

What a fun and unique episode of #LunchBreakLIVE.  Vegan tapas all the way!  I hope you give this dish a try and let us know how you liked it.  Take a photo of your finished recipe and tag @JaneUnChainedNEWS on Instagram.  Hop over to the #LunchBreakLIVE page where we have a ton of other recipes for you to try.  Until next time…keep cookin’!