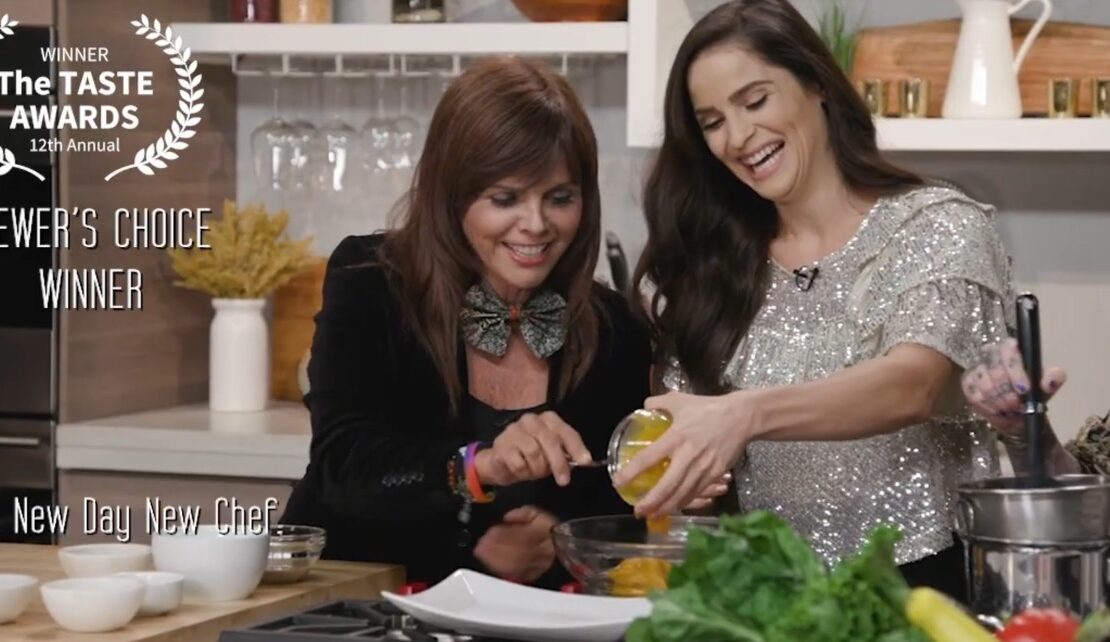 NEW DAY NEW CHEF, JaneUnChained’s popular vegan cooking show, now streaming on Amazon’s Prime Video, just won two prestigious Taste Awards, considered “The Oscars of Food.” We were nominated for 8 Taste Awards, up against some meat-heavy competition. The fact that the awards we won were both VIEWER CHOICE awards tells me the people – the consumers – are ahead of the foodie chattering class when it comes to the plant-based food revolution!

VEGANS HAVE MORE FUN IN THE KITCHEN… NOT KIDDING!

New Day New Chef: Support and Feed Edition won for “Best Filmed at Home Episodes or Film.” This season looked at the work of Maggie Baird, whose organization raises funds for vegan restaurants to make nutritious, delicious food for those in need. The season featured a slew of celebrities, including Downton Abbey‘s Lesley Nicol, Dynasty‘s Elaine Hendrix, Lost‘s Emilie de Ravin, Dancing with the Stars‘ Joanna Krupa, and America’s Next Top Model‘s Katie Cleary, It even included a cameo appearance by Maggie’s multi-Grammy-winning, vegan children, Billie Eilish and Finneas.

BLENDER DANCE WITH ME!

The plant-based cooking shows are hosted by moi and produced through my 501 c-3 non-profit, the JaneUnChained News Network, in conjunction with Emmy-winning Executive Producer Eamonn McCrystal of Inspired.

One of the fun, signature themes of the series is the Blender Dance. Creating vegan dishes often involves the use of a blender. When faced with the prospect of all that noise, Eamonn decided to make it a fun dance break. It provides lots of laugh-out-loud moments.

We wanted to show that whipping up plant-based meals is a joyous experience. There’s an infinite variety of combos in veggies, legumes, grains, nuts, and fruits. Today we can put an interesting vegan spin on every traditional dish. You might say vegan cooking is the New Nouvelle Cuisine.

AND, WE’RE JUST GETTING STARTED!

All of this grew out of humble beginnings. When Facebook started Facebook LIVE in 2015, JaneUnChained started doing a daily LIVE vegan cooking show, called LunchBreakLIVE, on Facebook.com/JaneVelezMitchell. It’s still happening every single day at 12:30 pm pacific/3:30 pm Eastern. We have NEVER REPEATED A RECIPE. We have NEVER MISSED A DAY! It’s 7 Days a week. None of this would have happened without the passion and dedication of JaneUnChained’s huge volunteer team of citizen journalists and vegan chefs!

The continued success of that venture showed us that there is a craving for vegan content that advertiser-based mainstream media is simply not providing! That’s how New Day New Chef was born!  Now, it’s on Amazon’s Prime Video in the United States, Canada, England, Ireland, Australia, and New Zealand. And, it’s on public television stations across America. We just taped our next season, New Day New Chef LIVE, featuring some of America’s top chefs showing off their skills with no second chances. You won’t believe what we’ve come up with this time. Gotta watch!

Vegan Cheesy Meatballs You Will Dream About