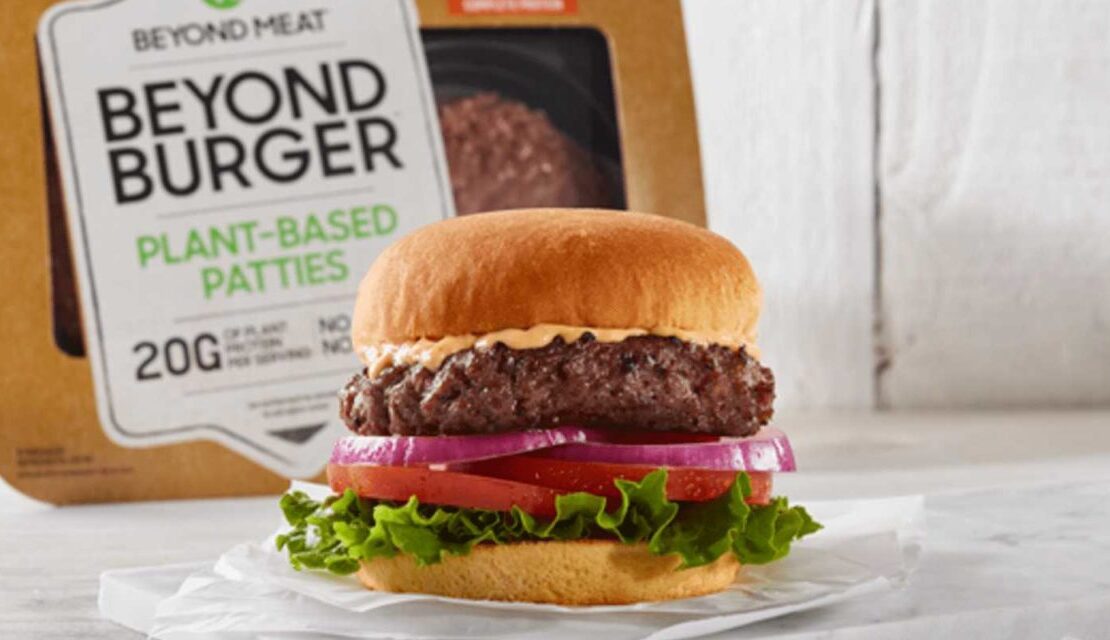 THE RISE OF THE FAKE-MEAT TITANS

In the last three years, makers of plant-based meat alternatives have begun going public. One after another, they have been launching their IPOs (initial public offering) joining the international stock markets. Now, investors are drooling over their new tantalizing toys: vegan stocks. Coming up, another leading plant-based burger maker may be ringing the opening bell on Wall Street!  There are rumors that Impossible Foods may go public following the success of Beyond Meat having done so in 2019. Let’s get some popcorn (drizzled with vegan butter) and watch!

Beyond Burger is made by the California company Beyond Meat. You can go behind the scenes and see JaneUnChained’s tour of the company several years ago when it was in its early stages. In May 2019 it made history as the first fully plant-based food brand to go public. It started very successfully. Shares soared 163 % from the $25 offering price on the first day of trading. At the time of writing (April 2021) the stock is now worth around $135 per share.

Soon after,  The Very Good Food Company (VRYYF), which owns The Very Good Butchers, went public on the Canadian Securities Exchange. They saw an 800 % increase in stock value in the first few days of trading. Other companies followed suit, such as Modern Meat (SUVRF),  Tattooed Chef (TTCF),  and Laird Superfood (LSF).” And, just this week, Globally Local Technologies Inc. began trading on the Toronto Stock Exchange’s Venture Exchange under the symbol GBLY. This is historic because it is reportedly the world’s first publicly traded vegan fast-food chain.

Now Reuters has reported that Impossible Foods Inc, which makes the Impossible Burger, “… is preparing for a public listing which could value the U.S. plant-based burger maker at around $10 billion or more, according to people familiar with the matter. This would be substantially more than the $4 billion the company was worth in a private funding round in 2020.” Other big plant-based companies, such as the oat products giant Oatly and the egg-replacement maker JUST, are also reportedly set to go public soon too.

Because I live in the UK, I am not as investment savvy as the average American. Although I have never bought any stock, in 2017 someone kind of did it for me. I was unwittingly forced to invest in what I considered unethical companies (pharmaceutical, tobacco, fossil fuels, etc.) when I was auto-enrolled into a pension fund by one of my former employers.

As an ethical vegan, when I found out about the kind of fund the organization chose for their employees, I complained. When I let my colleagues know, my employer fired me. So, I took it to court for unlawful dismissal. After two years of litigation, I won. This ruling was monumental. It made ethical veganism a protected class in Great Britain!  It has had a ripple effect of sweeping changes in corporate policy toward vegans, making businesses more respectful of vegan beliefs. I also felt I regained control of where my investments go.

WHEN VEGAN-FRIENDLY COMPANIES GO PUBLIC,  ORDINARY  VEGANS CAN PARTICIPATE IN THE STOCK MARKET, WITHOUT COMPROMISING THEIR VALUES.

The process of selling stock, which was formerly held privately by a few and is now available to any new investors, is social progress. It democratizes capital – at least in theory – and in a capitalist society, this means a chance for more people to try to have a piece of the cake. If you are vegan and want to invest some of your money, now there are more companies suitable for you to choose from. Vegan stocks are what conscientious vegan investors needed.

WHAT THE EXPERTS THINK ABOUT VEGAN STOCKS

I am not a stock expert, and we certainly are not recommending any stocks or investments in this article. We are just giving you an overview of the space. I first contacted Claire Smith when I was looking for support for my litigation. She is the founder and CEO of Beyond Investing and adviser to the vegan-friendly exchange-traded fund VEGN ETF, the first of its kind. I caught up with her again when she was in Ireland just before returning to her home in Switzerland.   I asked her what she thinks about all this.

“It’s an excellent development. And it was something I was looking forward to since I started investing in these companies in 2017. I could see that Beyond was busy getting bigger and was kind of the leading company at that time. It had already done quite a number of fund-raises.  To go public was the next logical thing for them to do.

“And the thing I was really excited about is that Beyond was something very unusual within the food space: a fast-growing company that would trade at a premium to the rest of the sector.  After it listed on the stock exchange, at a certain point it was trading at 70 times its revenues. Whereas Tyson Foods, which is a big meat producer, was trading at 0.7 times revenues, a huge difference in valuation. “

IT’S MORE THAN A FAD… IT’S THE FUTURE!

“I SEE MANY OF THE COMPANIES WHOSE RAISES ARE STARTING TO MOVE INTO THE HUNDREDS OF MILLIONS GOING TO THE STOCK MARKET IN ONE WAY OR ANOTHER.”

DIVING INTO THE MAINSTREAM CAPITALIST OCEAN

When a company goes public, its visibility increases, and it can raise more capital with which to grow. But it is still a gamble, and it may backfire. By launching an IPO, the company plunges into the turbulent capitalist ocean. As with anyone who jumps into the water, it is not quite clear what will happen when you hit the water…. elegantly go deep and surface somewhere ahead, or splash all over and perhaps even drown.

Why are there so many plant-based companies jumping into such risky waters now?  Because the food vegans eat is becoming fashionable among carnists and omnivores! Veganism is reaching the mainstream realm, so there are great profits to be made. Investment bank UBS forecasts the global plant-based meat market will grow rapidly to about $50bn by 2025.

Vegan companies are growing in number and size. They are now seriously rivaling their animal-based competition. They are no longer niche enterprises supported only by the still relatively modest vegan community.

Vegan stocks are a sign of the spectacular growth of the commercial side of the dietary dimension of veganism. But, selling food is not what veganism is. Veganism is a philosophy that goes beyond food. Hopefully, the other dimensions of this social movement can catch a ride on this commercial wave. Perhaps soon, we will notice its effects in the growth of its philosophical side too, and the value of the ethics of veganism will also rise.

After all, veganism is a public movement. If the companies seriously competing with carnism go public, this could enrich the resources of the vegan community. I hope that non-vegan companies do not buy all the vegan stocks and ruin it for the rest of us. And that 100% vegan companies do well going public and don’t end up being controlled by carnists. I really hope the profits generated will be invested into the vegan future, and not back into animal exploitation. Claire reassured me this loss of control is less likely when the companies grow enough to be able to go public:

“There is a risk that they could be taken over. But, the big companies would have to accept that they are currently buying these companies at a very high price. I think such an acquisition would be quite dilutive to earnings. In some ways, if the public market is valuing these stocks highly, it could even be almost protective to them against a takeover.  If it’s a share for share deal, the board would probably reject the deal, and if they put it to a shareholders’ vote, then the shareholders could reject it. “

We know that creating the vegan world we all dream about will take a long time and it will not be easy. We need to advance on all fronts, be proactive and take risks. As they say, nothing ventured, nothing gained.