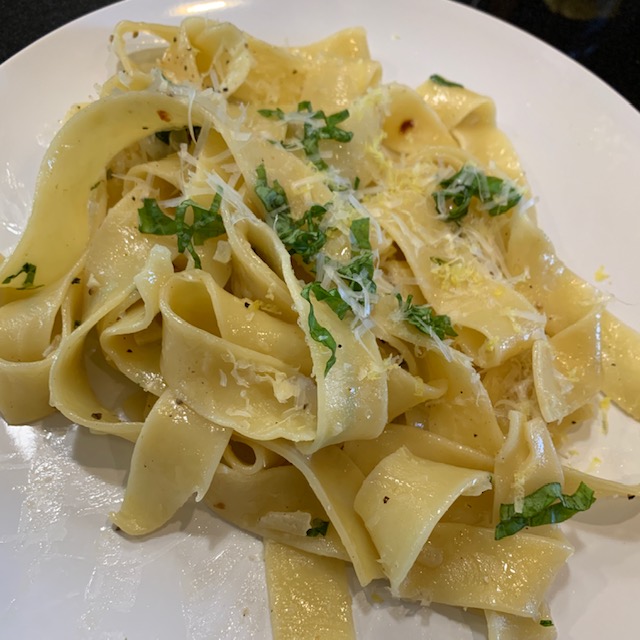 Vegan Pasta Recipe That Is So Easy To Make Yet Super Tasty!

Plant-based lemon pepper pappardelle pasta in olive oil, spices, lemon & red pepper flakes with basil! This is a vegan pasta recipe that will blow your mind because it is so incredibly flavorful and so simple to prepare.  Guest chef Joe Hehl, creator of the vegan recipe blog: “Dragged Through The Garden,” joins us on this episode of #LunchBreakLIVE, showing us exactly how to throw this pasta dish together.  let’s take a look…

Joe cooks, cleans, and voices the mildly cynical, albeit conversational vegan recipe blog called Dragged Through The Garden. With a focus on veganizing nostalgic/latchkey fare, discontinued fast-food menu items, and regionally niche American cuisine, Joe’s mission in DTTG is providing approachable, step-by-step recipes free of lengthy intros and long-winded paragraphs. Joe also can’t afford a nice camera. Based in Chicago, Illinois with no formal culinary training whatsoever, the idea of “why isn’t there a vegan version of this uber-romanticized latchkey dish on the internet” subsequently blossomed into Dragged Through The Garden, a phrase in reference to the vegetable-dense makeup of the Chicago-style hot dog. But, also somewhat redefined as making familiar dishes vegan by dragging them through the garden. DTTG is unpretentiously geared toward an audience of those who wish to experiment with plant-based cuisine and recreate nostalgic fare sans meat or dairy. Joe also offers menu consultation and recipe development for restaurants and breweries looking to expand into the world of vegan options. He also dabbles in freelance writing.

Let’s See How To Make This Vegan Pasta Recipe

Lemon pepper pappardelle is a tasty pasta flavored with olive oil, spices, lemon, and red pepper.  You also get just the right amount of basil added in, making for a perfect combo of flavors in every bite.  Your kitchen will be filled with so many delicious aromas while you cook up this recipe.  It is a filling meal that would be a perfect main dish for a friendly dinner party, so go ahead and give it a try. 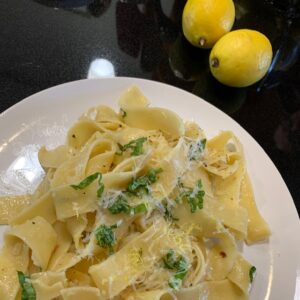 THE PASTA PARTY COMES TO AN END

All good things come to an end, but man was this a tasty episode of #LunchBreakLIVE.  I hope you give this vegan pasta recipe a try and let us know how much you loved it.  Take a photo of your finished dish and tag @Unchained_TV on Instagram.  Looking for other easy plant-based recipes to cook up?  Hop on over to the #LunchBreakLIVE page, where we have a ton to choose from.  Until next time…keep cookin’!

Happy Thanksliving! Thanks to These Vegan Brands!!