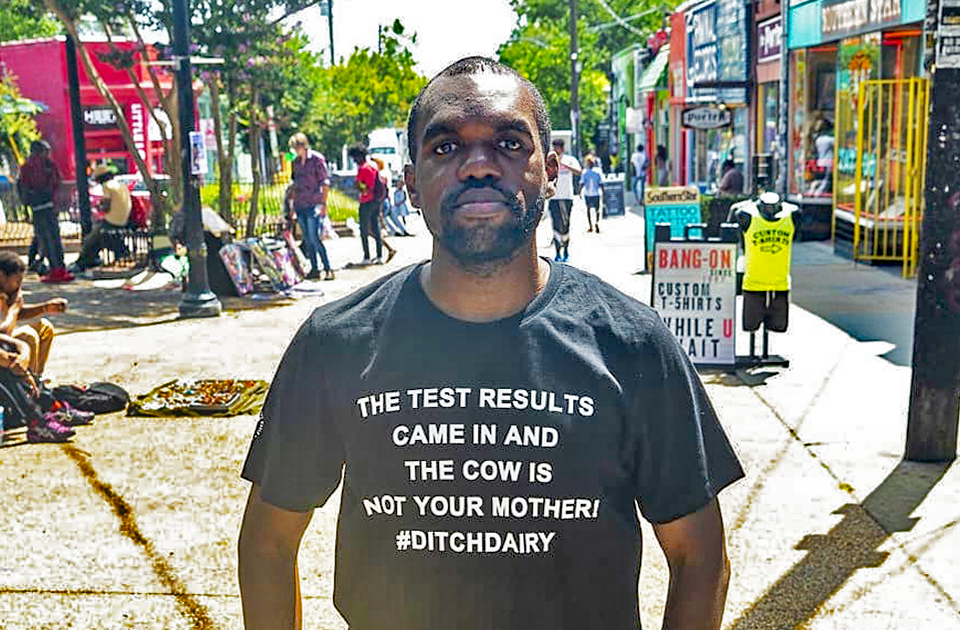 39-year-old Soul (Christopher) Eubanks says he founded APEX Advocacy with a very specific goal: to increase the number of BIPOC (Black, Indigenous, and People of Color) who participate in animal activism. The Atlanta-based activist simultaneously advocates for racial justice, veganism and animal rights,  drawing attention to what he calls the intersection where the exploitation of animals and the oppression of marginalized communities meet. He believes it’s possible to create a big tent and battle many forms of injustice at once. Eubanks says that is a key part of his mission to empower People of the Global Majority, including people who are Black, Asian, Brown, dual-heritage, indigenous to the global south, and others racialized as ethnic minorities.

UnchainedTV’s Jane Velez-Mitchell interviewed Eubanks about  his new organization. You can watch it in its entirety here:

As a social justice advocate and public speaker, Eubanks has taken an active role in numerous projects including co-organizing Atlanta’s first-ever animal rights march. Like many vegans, his vegan journey started after watching a documentary:

“I became vegan after watching ‘Conspiracy’. One of the things that hit me like a light bulb was the fact that I was contributing to the exploitation of animals. Meanwhile, I was really angry at society for the way that people of color had been exploited and abused. And, I felt sort of like a hypocrite knowing that I was doing the same thing to another group of individuals. Once I made that connection, I said: ‘I really have to speak out about this. This form of discrimination is something that I’ve been contributing to my entire life.’

“I began doing activism and organizing in my community. And a lot of times, I discovered that there wasn’t a lot of diversity, or as much as I would have liked.  I saw that there was a need to connect the animal rights movement with other groups of people. I tended to see a lot of the same type of people at animal rights events. It didn’t crossover into what I feel is the global majority of the population of the world. I started to speak out about this, and this led me to develop my own animal rights organization: APEX advocacy.”

In 2021, Soul registered APEX advocacy in Georgia as a non-profit. He explained what the organization is about:

“APEX stands for Animal Protection Equality Intersectionality. We cover a lot of diverse ideas and concepts. We have the approach of making this space for everyone, but it is led by the people of the global majority. So, a lot of the content that we create discusses things that are related to animal rights from the lens of people of color. Now, we’re also shifting into taking on animal agriculture. We want to use our platform, our resources, as a tool to help people in marginalized  communities that have fights with animal agriculture to stand up to it.”

Eubanks has an answer for those who might question whether his intersectional approach spreads activism too thin by tackling too much. He explains his strategy this way:

“What makes the animal rights movement so unique is that it’s a movement that’s not led by the oppressed individuals. We don’t have pigs that can speak up for themselves against humans. As humans doing the work to liberate others, we have to understand how the things that impact us, also impact the movement. That’s why it’s very important for us to not be ignorant of these dynamics that we have within our humanity: the history of slavery, the Black Lives Matter movement, what’s going on with the Asian community right now.”

We have to make sure that the animals remain at the forefront, but we can’t ignore these other things also in our movement.”-  Soul Eubanks, social justice advocate

The Risks of the Intersectional Animal Rights Approach

Intersectionality is an analytical framework for understanding the commonalities in various forms of discrimination. For Intersectional Vegans, non-human animals and marginalized communities are both victims of the same systems of oppression. However, not everyone has welcomed this new approach.  So, Eubanks says he has a strategy to deal with this sensitive issue:

“Sometimes people may make the comparison and try to say these animals are being exploited just like such and such. That’s something I particularly don’t do. What I say is that these systems that oppress all of us are put in place, and they are oppressing us in the same way. The same structures that oppress non-human animals are in place to oppress human animals.

“We have to be very aware of how people may perceive what we are saying. I think it can come down to a very nuanced detail.

“I focus on the systems of oppression that oppress tons of groups of individuals without necessarily having to compare the oppression to the other group.”- Christopher “Soul” Eubanks, social justice advocate

Eubanks hopes that animal rights and vegan organizations work to eliminate the inequalities and injustices identified in this report and work toward inclusion of activists from marginalized communities who might otherwise feel isolated. Eubanks talks about this:

“The thing that ‘Encompass’ works for is specifically trying to provide racial equity within the animal protection movement, which is not the same as veganism in general. So, when we talk about our diets and our consumption of animal products, that’s different from the systems that are in place within the animal rights movement in terms of who has power, who has access or who gets funds and where these funds come from… The systems that are in place in the mainstream animal rights movement, are typically not from people in black and brown communities.

“We have to make sure their voices are heard, that the initiatives that are put forward are from diverse mindsets. We also don’t want people to be tokenized or have people regurgitate the same things that have always been said.”

Traveling as a Vegan Amidst a Pandemic