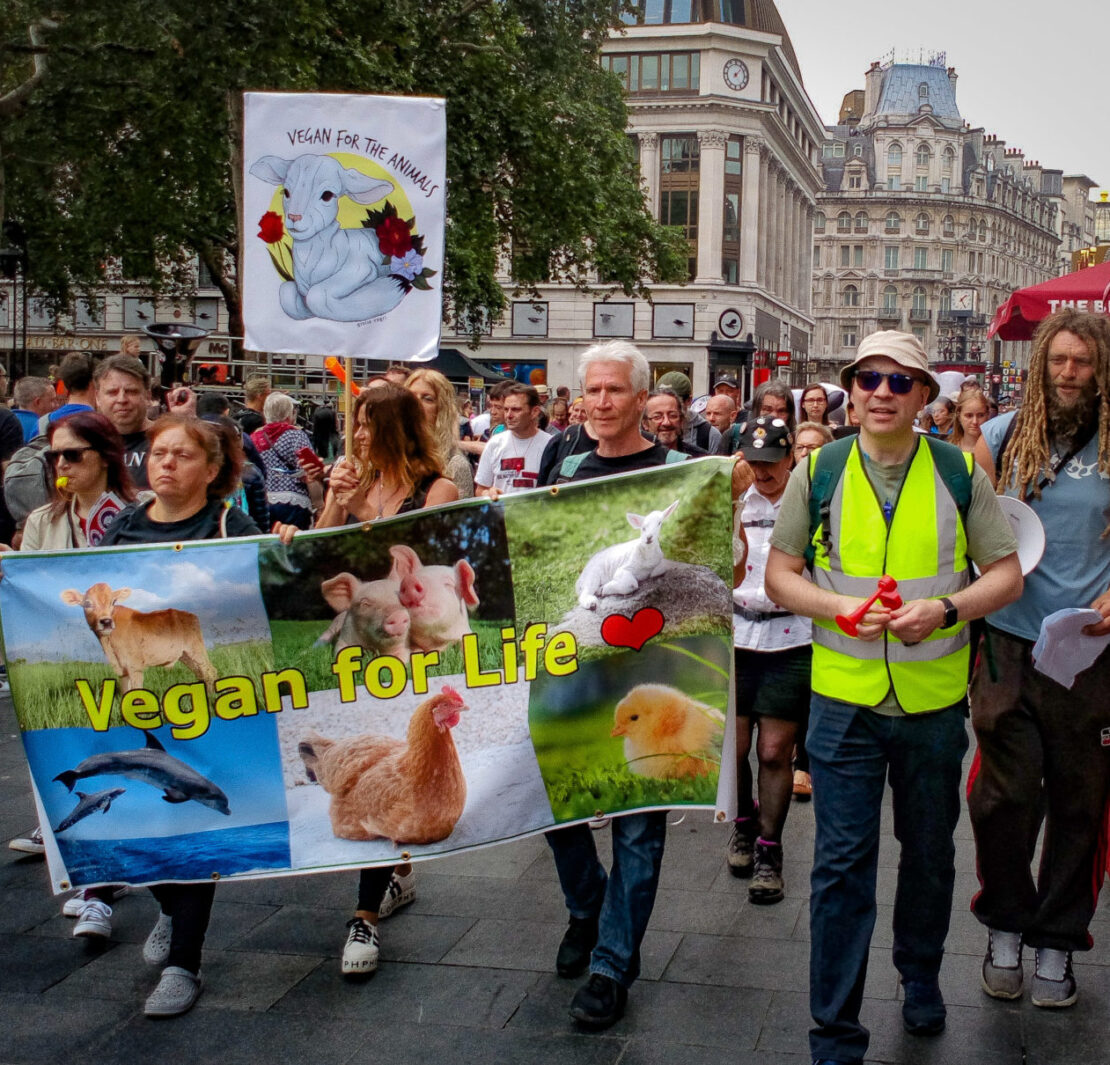 Society can be a hostile environment, especially for those advocating for a more evolved culture where all sentient beings have certain basic rights, like the right to exist free from violence. As millions around the globe embrace that concept, in the form of veganism, they are forming into a group of people who themselves need certain basic protections. Hence, the new movement to make veganism a protected class, along with religion, race, ethnicity and sexual orientation.

If we reach the end of this dangerous chain, decent people may regret not standing up earlier to stop it. Communities of animals, marginalized groups or even vegans, can all become the victims of hate and hate crimes.

A BRIEF HISTORY OF THE ETHICAL VEGAN COMMUNITY

In 1944, a group of people in England, who had been rejecting animal products for some time, gave a new name to an old philosophy: veganism. Since then, a fast-growing community of like-minded people have been using the same name to define their philosophy. These are ethical vegans, or vegans for short,  as opposed to those who just follow a plant-based diet. However, some people wrongly believe this community doesn’t exist.

I WAS FIRED FOR MY BELIEF IN VEGANISM

When on Jan. 3, 2020, I left Norwich’ Magistrate Court in the Northeast of England, the press was waiting for me as they wanted my comments regarding what had just happened. A judge in the litigation case I initiated against my former employer had ruled that ‘ethical veganism’ was a protected philosophical belief under the Equality Act 2010. Therefore, my discrimination case for unlawful dismissal could continue. That was a landmark decision and the entire world wanted to know about it. After the media got my comments, they interviewed some locals for their reaction. One of them said: “I don’t think veganism is a real thing.” Denial is the doorway to hate.

When several million people who define themselves as ‘vegan’ see their identity denied, it’s time for the progressive members of our societies to stand up to support them.

IT’S TIME TO TAKE THE RIGHTS OF VEGAN SERIOUSLY

The idea of ‘vegan rights’ is not new. But, now, it is morphing into a social justice movement of its own. In 2012, Jeanette Rowley founded the International Vegan Rights Alliance. Its mission included assisting vegans who feel disadvantaged or experience discrimination and unfair treatment as a result of the policies and practices developed in a speciesist society.

All vegans are humans, and human rights are the basis of the concept of vegan rights. In 1948 the UN adopted the Universal Declaration of Human Rights, and in 1966 many nations signed two legally-binding international treaties based on it. Not only do they protect individuals giving them some rights (including the right to non-discrimination) but also communities with common identities, beliefs or characteristics.

Ethical vegans are a community of humans with a shared philosophy and they deserve the same protection from discrimination as any other protected group.

THE  CASE FOR VEGAN RIGHTS

Do vegans everywhere deserve explicit protection beyond general human rights legislation, like the one granted in the UK? Some communities have special protection when their rights are often violated. If you are vegan you probably have experienced some discrimination. In my case, my former employer fired me! So, you know this is already happening. Research shows it happens quite often, actually. In 2019, the UK law firm Crossland Employment Solicitors surveyed 1,000 vegans, concluding that a staggering 45% of them felt discriminated against by their employers. In 2020, The Times reported that in the previous five years the British police recorded a total of 172 crimes where vegans were the victims because of their veganism. It’s probably the same in other countries – or worse!

Discriminated and harassed vegans will become ‘stressed’ vegans, and some may end up abandoning veganism if they find it too stigmatizing. Others may simply be less effective at promoting it when forced to keep a low profile.

THE ANIMALS’ CASE FOR VEGAN RIGHTS

When I secured ethical veganism as a protected class in the UK, some vegans complained by saying this took attention away from the animals. I think the animals would back me up on this one.

The animals will end up paying the price if society silences those who defend them. Fewer animals will have rights if employers fire vegans who advocate for animal rights. If people harass animal advocates, they will no longer be able to function properly, so the vegan world we all dream about will take much longer to achieve.

It may be time we begin celebrating Vegan Pride or march demanding Vegan Rights. We need a vegan rights movement, and my legal case may be the seed from which it can grow. Humanity, all animals and the Earth will benefit because the ‘do no harm’ of veganism applies to all of these.

What do we want? The right to help everyone!