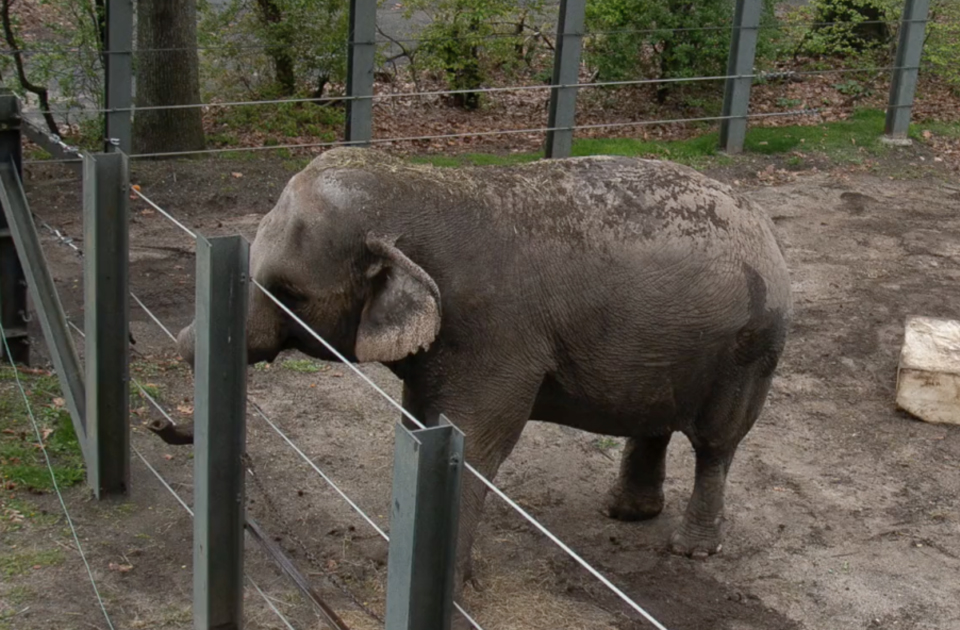 On June 14, 2022, the Court of Appeals ruled on the case of Happy, the lonely elephant at Bronx Zoo, and unfortunately, it does not look good for her — or any of the other captive animals whom animal rights advocates had hoped could be recognized as legal persons by US law.

Happy is a wild-born Asian elephant, possibly from Thailand. The Bronx Zoo has imprisoned her for 45 years. She has been forced to live in solitude for the last 16 years of her confinement. Moved by her plight, animal advocates took legal action to “free” her from the zoo. They argue Happy is a legal person and has rights to liberty. They were seeking to ability to relocate her to an elephant sanctuary.

On May 18, 2022, the Nonhuman Rights Project (NhRP), the only civil rights organization in the US dedicated solely to securing rights for nonhuman animals, held a rally outside the Court of Appeals in Albany just prior to the historic hearing that marked the first time New York’s highest court would even consider whether a nonhuman animal can have legal rights. To the disappointment of those who long to see Happy obtain a measure of freedom,  the court has now made its decision against Happy. And it all has to do with Habeas Corpus.

“We lament that the Court chose not to do its clear common law duty in this case by bringing Happy’s legal status into the 21st century.”- Nonhuman Rights Project

What Did the Court Say?

The Habeas Corpus Act of 1679 is a British law which prevents imprisoning people unlawfully. The Latin sentence translates as “you may have the body.” It has since been used to fight against arbitrary detention by the authorities in many countries — including the US. It has now become the legal basis of most court cases seeking freedom for captive wild animals.

NhRP took the case to court. However, the court dismissed the petition on the ground “that animals are not ‘persons’ entitled to rights and protections afforded by the writ of habeas corpus.” It also said that habeas relief is not available where petitioners merely seek to obtain a transfer from one lawful confinement to another. NhRP appealed this decision. But now, the Court of Appeals in New York has dismissed the appeal. It has re-stated that habeas corpus only applies to humans. The judges’ decision said:

“The question before us on this appeal is whether petitioner Nonhuman Rights Project may seek habeas corpus relief on behalf of Happy, an elephant residing at the Bronx Zoo, in order to secure her transfer to an elephant sanctuary. Because the writ of habeas corpus is intended to protect the liberty right of human beings to be free of unlawful confinement, it has no applicability to Happy, a nonhuman animal who is not a ‘person’ subjected to illegal detention. Thus, while no one disputes that elephants are intelligent beings deserving of proper care and compassion, the courts below properly granted the motion to dismiss the petition for a writ of habeas corpus.”

What Did Happy’s Advocates Say?

This ruling from New York’s highest court is not appealable. Reacting to the decision, NhRP said in a statement, “This is not just a loss for Happy, whose freedom was at stake in this case and who remains imprisoned in a Bronx Zoo exhibit. It’s also a loss for everyone who cares about upholding and strengthening our most cherished values and principles of justice – autonomy, liberty, equality, and fairness – and ensuring our legal system is free of arbitrary reasoning and that no one is denied basic rights simply because of who they are.”

NhRP had produced renowned experts in law, philosophy, religion, elephant cognition, and social justice, giving testimony on behalf of Happy. Some of these showed that elephants are intelligent beings. They have the capacity for self-awareness, long-term memory, intentional communication, empathy, and significant emotional response.

Steven Wise, the founder of NhRP, said to The Guardian, “We will take a really close look at why we lost and we’ll try to make sure that that doesn’t happen again to the extent that we can.”

Although the Court of Appeal decided to dismiss the petition, this decision was not unanimous. Two of the judges dissented, issuing powerful statements about the cruelty of captivity and how our insensitivity to such animal cruelty diminishes us as a human species.

The New FDA Modernization Act Is Now The Law!

“A gilded cage is still a cage. Happy may be a dignified creature, but there is nothing dignified about her captivity.” – Justice Rivera, dissenting judge

“When the majority answers, ‘No, animals cannot have rights,’ I worry for that animal, but I worry even more greatly about how that answer denies and denigrates the human capacity for understanding, empathy and compassion.”- Justice Wilson, dissenting judge

Hope For Future Legal Cases on Behalf of Captive Animals

If several learned judges now agree that Happy should have the right to be taken to a sanctuary, those defending her, or another wild captive animal, could perhaps win a future case when all the judges might agree.

As a reaction to this split decision, NhRP said in a statement, “We applaud the powerful dissents by the Honorable Judges Jenny Rivera and Rowan D. Wilson, which we see as a tremendous victory in a national and global struggle for nonhuman animal rights which we’ve only just begun.”

This is not the first time they have gotten a judge’s support, as NhRP explains,

“They follow similarly supportive arguments made by the Honorable Judge Eugene M. Fahey in our chimpanzee rights cases before he retired from the Court in January of 2022. Judges Rivera, Wilson, and Fahey join a growing body of judges from around the world who are considering and recognizing nonhuman animals as rights-holders, and we look forward to citing these dissents in our elephant rights case already underway in California and in the new cases we’ll file across the US and in other countries in the coming months. We have persuaded three judges on New York’s highest court since 2018; we know we’ll persuade more.”